From Beyond the Frontier
Jump to: navigation, search

The Combat Scout Suit (C/SS) is designed as the primary armor of scouts and infiltrators for The Initiative. It is derived from the Combat Assault Suit (C/AS).

As a variant of the Combat Assault Suit (C/AS), many of the details are similar.

The standard helmet of the C/SS is a vacuum-rated full-face helmet, with a polarized visor. Integrated into the visor is a headsup display capable of projecting a variety of information and visual filters for the wearer. The visual filters range from thermal or night vision, magnification, and infrared, while the information that can be displayed range from basic timers, medical readouts, maps, and other mission-pertinent information. Additionally, the helmet carries a number of highly sensitive audio pickups, intended to provide the wearer with enhanced awareness. Furthermore, the HUD is capable of integrating with most standardized equipment to display diagnostic details, such ammunition and battery capacity of a battle rifle.

Because the helmet is rated for vacuum, it integrates an internal oxygen recycler, using genetically engineered plant life to filter out and recycle carbon dioxide. A secondary, non-organic, filter removes any plant contaminants from the air that is then provided to the wearer, though is not strictly required. In an oxygenated environment, vents in the helmet can be opened to allow for external oxygen to be filtered in.

The interior of the helmet is coated in padding to allow the wearer to take impacts to the head without risk, while the exterior is coated in a combination of ablative ceramic plating over a hardened metal shell. However, because speed and sensor capabilities were prioritized for the scout version, the armor plating is not quite as thick as that of a regular Combat Assault Suit. Furthermore, most scouts utilize an additional add on that covers the polarized visor with an additional sensor array capable of picking up more information than the regular integrate system. 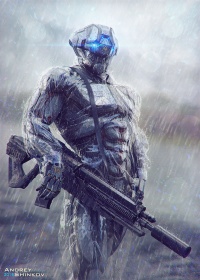 The body of the armor is designed as a modular system, to allow components such as the greaves, gauntlets, pauldrons, and so forth to be exchanged or removed entirely as needed for repairs or modification. The armor is covered in composite armor designed from an ablative ceramic plating over a hardened metal shell. The interior of this shell is honeycombed, with pockets of dilatant gels intended to minimize the ability of a munitions to penetrate through to the wearer. Additionally, these gel pockets are used to adjust the interior temperature of the suit to the preferences and needs of the wearer, and contain sensors to monitor the physical statistics of the wearer, and adjust systems as needed to compensate or assist. The armor plating however is not as thick or as robust as that of an assault suit, leading to a less notable profile than that of other armors.

Housed in the torso and legs of the armor is a highly efficient water reclamation system, intended to minimize moisture loss and allow for personnel to remain armored for extended periods as needed. The system also allows for the filtration of water pumped in from environmental sources such as stream, or melting ice. This system in the scout suit is designed to allow for nutritional packets to be added in, as well as to carry more water than that of a standard suit, in an effort to allow scouts to operate independently for longer periods of time without resupply in the event of a long-term scouting mission.

The muscles of the suit are comprised of twisted carbon nanotubes, utilizing an ion-based actuation, mimicking the form of biological muscles. This affords the operator enhanced speed and strength when compared to a person not equipped with such a suit.

While the Combat Assault Suit (C/AS) went into production in 2058 CE, the Combat Scout Suit (C/SS) would not be developed until 2060 CE, with production beginning in 2061 CE.